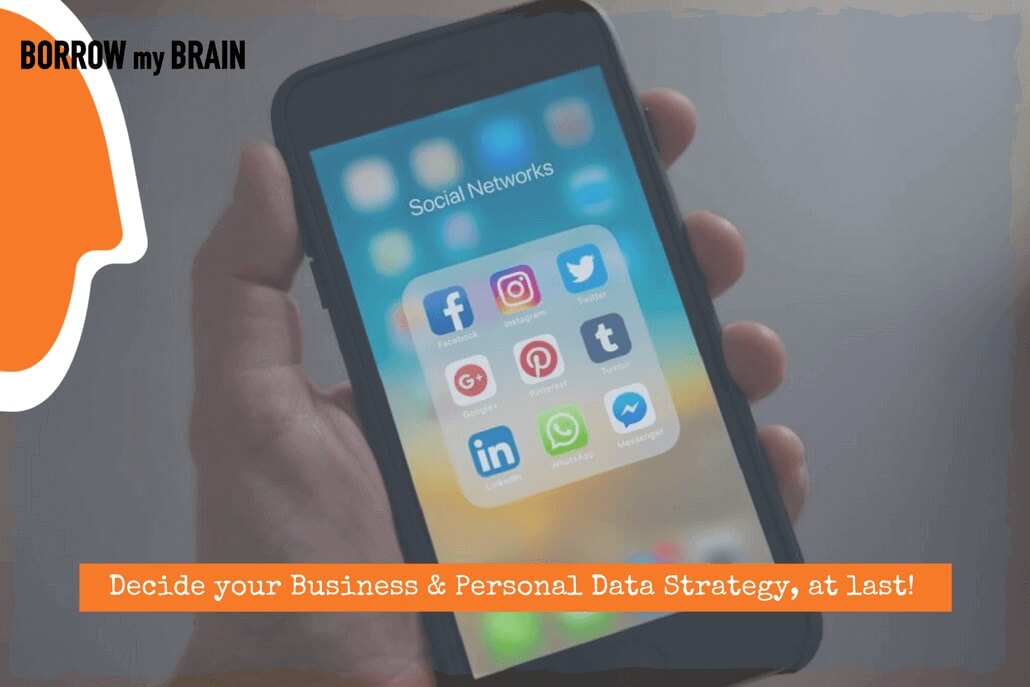 Facebook-Analytica data crisis shows to your Strategy. Why? Because it’s not important what they do, or how they serve their purpose. It’s about what exactly do you “consume” and “share” in social media, how, and when.

I don’t read the news from within Facebook. I don’t opt-in to third-party apps on Facebook. I don’t fancy my morning coffee with Facebook. I’ve even tried the 99 days of Freedom out of Facebook (believe me, it was THE detoxicating experience). But I still enjoy being close with friends and peers; message quickly for something I need; read-through my timeline for a 2-min relaxation; wish happy birthdays and wish well to people.

[inlinetweet prefix=”” tweeter=”” suffix=””]So, before we discuss or scrutinize Facebook, let’s take a moment to reflect on our personal and business data strategies[/inlinetweet]. Playing silly games and apps means we grant full access to third-parties we don’t know. Revealing and how much of our photography? Choosing if we post public, or only to friends? The list of decisions is big if you get what do I mean.

This crisis incident went viral in no time, but so as your data sharing! Any crisis, from Facebook-Cambridge Analytica incident, up to Halifax (breach of millions of financial customers) means that it goes viral in a second. It takes seconds to share your data and it takes less to machines, algorithms, apps, data analysts to perform their tasks… Do you know those tasks?

In the last three years, we have had more than 15 global cases of data breach and misuse of personal data. Of course, the newly created fintech, smart grid, social media platforms aren’t innocent at all; neither they do own a viable culture of security. But what is the role of the audience, the users?

A simple version of the story

As I got it, from global media, Facebook (let?) exposed data on 50 million users to a researcher who worked at Cambridge Analytica, which worked for the Trump campaign. Now that’s the point where things start getting ‘conspiracy theories’. Cambridge Analytica was created by Steve Bannon, funded by conservatives, aiming to become a big political consulting firm. Bannon became Vice President of the company and was involved in the 2016 US election.

How can you ‘harvest’ 50 million user profiles?

Easily. Create a ‘sexy’ Facebook app, in this case, a quiz. Everybody (out of boredom?) can ‘play’ in such apps (how will you look in X years etc). The app creator didn’t only collect data from people who took the quiz, but it exposed a loophole in Facebook API that allowed it to collect data from the Facebook friends of the quiz takers as well. To be fair, Facebook prohibits the selling of data collected with this method, but they’ve sold the data anyway.

Now let me ask you: what criteria do you have to sign-in to a platform? How do you give-in your personal data? Is it simply, that “many others use the same app/platform“? For me, such a strategy is:

Oh yes, it is! It allowed a third-party developer to engineer an application for the sole purpose of gathering data. For me, this is the exact problem: the ‘un-regulated’ openness of the platform, which I repeat, has many un-educated users!

Facebook founder and CEO Mark Zuckerberg wrote “I’ve been working to understand exactly what happened and how to make sure this doesn’t happen again. The good news is that the most important actions to prevent this from happening again today we have already taken years ago. But we also made mistakes, there’s more to do, and we need to step up and do it.”

But Facebook has known about this for more than two years, and only now are they actually acknowledging they made a mistake. For me as a Crisis expert, that’s a huge issue. It will carry-on for long the debate, on why to trust Facebook.

An update in the form of a tweet came on 11 April 2018 and #AskZuck appeared:

Boom, here it is. Zuckerberg hired the guy who ran the company who took the data. Ahead of the story breaking. We’ve never heard Mark say his name yet. Please get this to the floor. #AskZuck https://t.co/e8WSRO8Ibc

Is this data-breach also the users’ mistake?

It definitely is. Consuming time on each social media channel means that we know. We’ve read and learned more than the actual post, share, like. It means we’re responsible users and we adapt not to our personal desires, if we decide to be in social media, but on platform issues and peculiarities. I don’t care if Facebook’s security team is doing its job, or if they’re controlled by legal/policy. I care about me. What do I do? How, when, why?

I’ve opted-in as of 2007 to all major media channels. Now, for Borrowmybrain I spend a lot of time on social. You know, how it is. Three billion people ‘packed’ inside. We upload photos, we reveal moments of our daily lives and we keep logging in. The design experience and those smart technologists have studied a lot our behaviour.  Social platforms build addiction. Mobility, boredom, time-poor living, easiness all come to the aid of social media.

I also use social media to drive traffic and awareness to my website and presence areas. But there is a big warning sign for us: do it cautiously. Your kids’ photos, mentions, taking part in surveys, sharing your data and space with payment or collaboration platforms.

It’s all about business! I’m still laughing at friends who seem amazed when realizing that social media are paid platforms. They were acting the same in 2009 when I was advising for this evolution.

It’s all about business and money. This is why FB took away the publisher / company / blogger organic reach. For the money. It has used the algorithms to force us to pay for almost any attention if you have a business page. There’s no love affair. It’s not the “close friends” courtyard. It’s a business.

The Facebook-Analytica crisis, once more, fortifies my argument

It’s the second time I’m proven right to say, focus on your Content and on Own Media. Google allows you to earn attention. Of course, it benefits the payment ‘clan’ as well, but still, you get traffic from organic search results, if you create great content and a rewarding user experience. Instagram is growing. YouTube aligned with Google helps those with great content.

If you also run a business, go multi-channel. Add value. Forget the ‘routine’ and the ‘fatigue’ of Facebook-only. Watch out what do you share.

Is it a solution to #deletefacebook?

Not for me. It is easy to blame, but I will stay on Facebook, feeding the ”beast’ with a responsible usage pattern, as I was doing all the time. Avoiding and blocking haters and hecklers. Commenting on valuable items and showing what do I do, building my online brand and business.

There’s one last aspect of which I’m professionally interested: the crisis management side. CEO Mark Zuckerberg finally broke his silence following the Cambridge Analytica data scandal. While he apologized, the stock price has fallen hard. As is typical in crisis-response situations, the delay of reactive statement is an issue that many companies repeat.

The transparency is the second, crisis-related, issue at hand. If there is unpleasant news about what has happened to a company (and the industry affected), you should share your company truth immediately to all stakeholders, before you become news or ‘rumoured scenarios’. You never want other sources, to tell your truth! Facebook did the opposite.

Last but not least, we’re reminded again that no Brand is immune. No matter how big or ‘established’ it thinks it is…

The famous verbatim goes that “you can build for 20 years your reputation, and it only needs 5 minutes to ruin it“. This is now exactly the ‘bet’ of Facebook. The 4 out of 10 Americans in a recent survey said “Facebook is not a responsible company because it puts making profits most of the time ahead of trying to do the right thing.” and many others said that Facebook has had a negative influence on political discourse.

This case is of a wider social influence. It raises, once more, the issue of fake news, the respect to our data, spreading a thought of “who’s behind” in everything we see. I’ve told you, I don’t read news from FB, but I’m also worried about the company’s responsibility. This declining trust will also bring a growing concern about the impact that social media channels have on young teens.

If I was the Strategy responsible for Mr Zuckerberg’s management team, I would advice: let’s go out of the office to rethink our model, positioning, and promise. It seems we have impacted negatively politics in the US, we are questioned for end-user trust, there is a broken brand promise, and we’ve created problems for the business and publishers’ communities… all in two months. It sounds like we are risking all the things we’ve built before…

Success! Now check your email to download the free "10 Content tactics" from borrowmybrain.eu. Please check your Promotions or Spam folders, since we don't communicate often. Thank you! Tasos Pagakis Borrow My Brain Consulting

10 Branding tips we give to Marketing teams